Drums and Drones is a project dedicated to exploring the harmonic resonance of acoustic drums and percussion.

The Drums and Drones project initially came about from inspiration by La Monte Young and Marian Zazeela’s Dream House installation in TriBeCa, NYC.  I had spent a good amount of time, almost a year and a half maybe, volunteering there as a “monitor,” someone who minded the installation and greeted visitors during its open hours.  The duration of my shift, about 4-5 hours, was mostly spent sitting outside of the gallery space, with the immense sound pulsing through the door and walls, while reading up on the principles of Just Intonation and the historical background of La Monte, Marian, and their cohorts of the NYC experimental art scene.  I accumulated many hours, too, sitting in the space itself, embracing the impact of the finely tuned sound and light vibrations.  One can hear the installation, which is set three flights up from the entrance, as soon as the door is opened to the building.  The sound grows in intensity as the stairs are climbed, leading to the climactic moment when one reaches the landing on the third floor, opens the door there, and takes the first step to enter into the space.

I was exposed to this ‘tone sculpture’ for hours on end.  After a while, I would finally get it, only to have new doors opened in the pathway of experience.  Prolonged exposure only deepened its impact, and revealed it as the unending infinity it was designed to be with the only limit being myself.  The tones would dance in my head, hypnotic and entrancing, and I would hear tones that previously seemed veiled which were now resonating loudly and clearly somewhere between the air, my ear, and my brain.  I was mesmerized by the power of this emphasis on the physiological experience, and its psychoacoustic impact had me hooked.

Ultimately, this psychoacoustic impact is the result of the careful physics of the installations’s design, which is based on the Just Intonation tuning system.   All tuning systems are structured on relationships – tones are relative, some are higher and some are lower.  These tones are vibrations (as it is important to remember that sound is physical), sound waves that reach our body; the body/brain receives the impulse of these sound waves and absorbs them in its physiological process.  It is important to consider the vibrational relationship between sound waves and their  connection to the quality of being ‘in tune’ or ‘out of tune.’  Some vibrations exist in a harmonious way and others exist in a more dissonant way. In the tuning system of Just Intonation, the relationship between pitches is set in a such a way that each sound wave is an extension of a single fundamental reference tone, in that each sound wave is derived from it and also refers back to it.  Whether seemingly consonant or dissonant, each tone configured in this way is related to one another in that it is a physical extension of this original root pitch. (For more on Just Intonation see the essay discussing the topic on this site).

Drums and percussion have seen some but not much exploration of JI, yet they are designed to represent it as such.  Think about it: a drum head is tuned to a single pitch, one frequency. It has strong vibrations and is rich with harmonic material.  How do we go about isolating and controlling these frequencies, as overtones, in accordance with the principles of JI? Well, that became the task at hand of the Drums and Drones project. It is inspired by the experience of the beauty of the vibrations of sustained tones organized according to the overtone series, a naturally occurring system which implies that from a single source an endless infinity presents itself, simultaneously simple and complex…

Drums and Drones made it’s debut at the Stone, John Zorn’s club in NYC, on February 1st of 2007. Mary Halvorson, a Brooklyn-based guitarist and leading figure of the NYC avant-garde community, was curating the month there and asked me if I’d be up for playing. I took this as an opportunity to present new work, and I did.

With the pieces that were developed for this concert, a starting point was formed for what was to grow into a recording project. I had the idea of approaching this project as being a series of etudes, each one a study in the different ways of the application of the Just Intonation tuning theory to drums and percussion. As I experimented with various methods, I began developing more pieces with each one showcasing a specific playing technique and focusing on a complimentary set of overtones.

In this initial stage, which lasted from 2007 through 2008, I developed a basic method which laid the groundwork for a how-to of Drums & Drones electroaoustic pieces: 1) tune the drum head to a specific fundamental frequency 2) mic the drum and run the sound into a computer 3) with recording software, use very precise equalization to isolate and boost the frequencies of the drum’s overtones. (The fundamental I would use was most typically 60Hz, like La Monte, because it is the frequency at which Con Edison generates its electricity. In theory, the pieces on this album should be in tune with the hum of electricity in North America.) From the resonance of a drum expansive sound scapes now emerged. 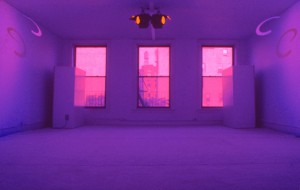